This is a past event. Registration is closed. View other 薯片叔叔共創社 Esperanza events.

A gamified way to learn coding and STEM!

Get your students to learn coding and STEM in a fun, easy and affordable way. And enroll ...

Register ​for the trial licence

and the CoderZ League Training Webinar on 5 Oct. Coding is the method of communicating with a computer. It has become a basic literacy in the digital age. And digital literacy will be a prerequisite for all jobs in future. Coding also helps children learn math, verbal and written communication and develop computational thinking, logical thinking, creativity and problem solving skills with confidence. Having children learn coding at a young age prepares them for the future.

by encouraging them to participate in a wide variety of inter-school, regional or international activities

such as visits or competitions to enhance students' interests

in learning and broaden their exposure to technology development…"

so that students of different learning pace

﻿can grasp their progress, and thus reduce the pressure from tests and examinations."

How to Teach Coding if I Don't Know How to Code?

It may not be easy for teachers to teach coding because of the lack of time, professional support and pedagogical resources. Thanks to technology, there are different tools that can help teachers integrate coding in the class curriculum with no need of an extensive prior-knowledge on coding. These tools can motivate and empower students to learn how to code in a gamified and self-directed way. CoderZ seeks to address the myth that girls can't code or they are not interested in coding.

Researchers from the North Carolina University show that women are better programmers than men. According to psychological and sociological studies, women tend to be more empathetic and adapt better to changes and new scenarios. Having these skills can make women better team leaders and problem solvers in coding teams.

﻿Let's give our girls the same digital opportunity as the boys!

CoderZ is one of the technology tools that can do the magic for teachers. CoderZ is an award winning education technology venture from Israel. It has won accolades from major edtech organizations such as ISTE and Brett. It was awarded the edtech startup with the greatest growth potential in the 2020 Edventures GBA Fellowship organized by Esperanza. More recently,  CoderZ was named the Best Coding and Computational Thinking Solution of the prestigious SIIA CODiE Awards. 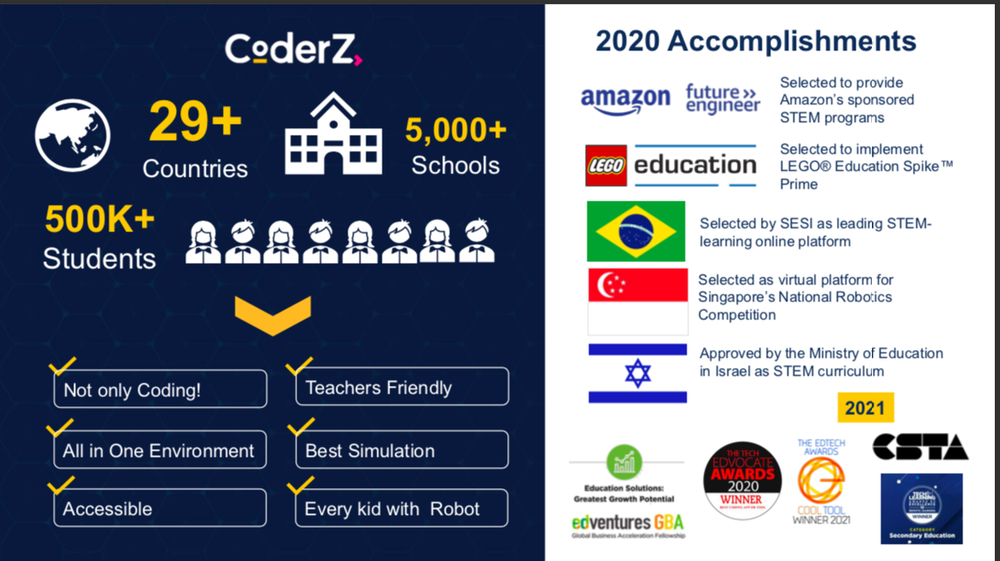 "Teaching coding is not difficult, but it is not easy to teach in an interesting way. Through CoderZ, students can learn Science, Math, Engineering whilst doing coding." ﻿"CoderZ is an excellent platform for coding newbies to start their journey from virtual learning environments to physical devices, it also comes with class management and rich set of good quality teaching and learning resources." 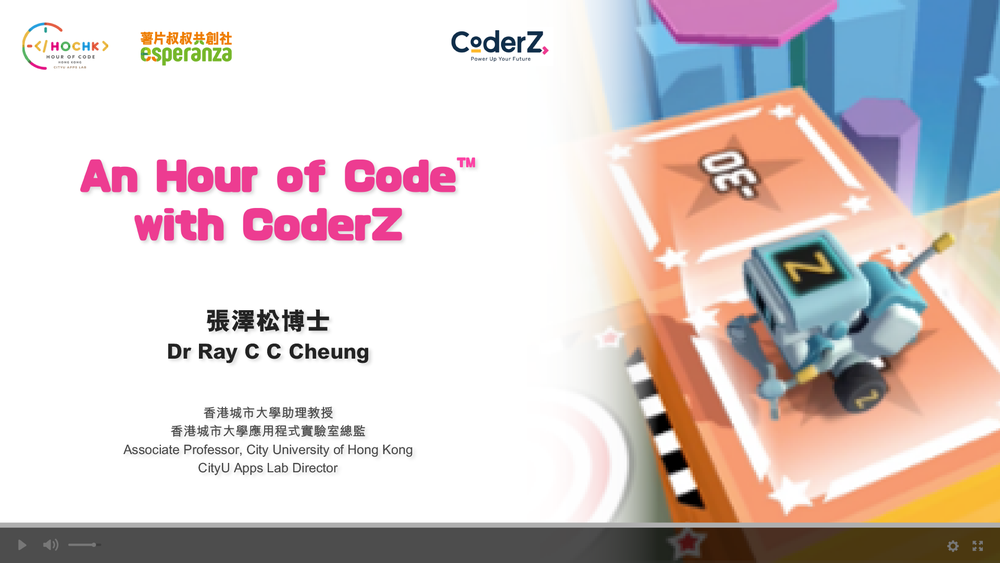 There are 4 CoderZ courses catering to students of different ages. 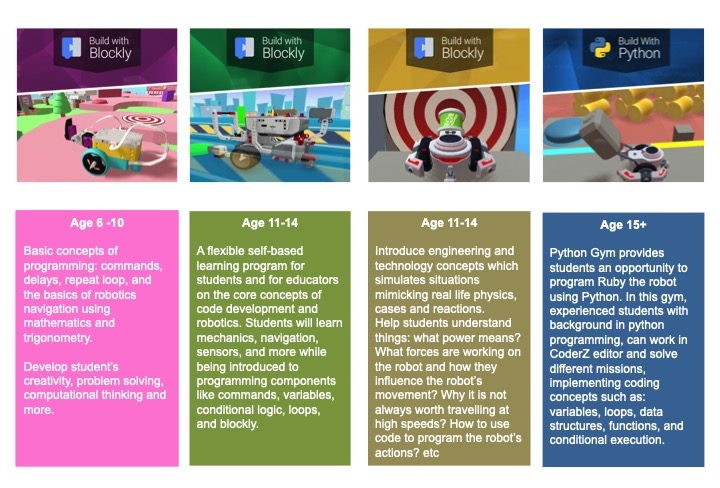 CoderZ League is an exciting online, cloud based, international robotics tournament with students working collaboratively in teams to program virtual robots to complete missions in a 3D environment. Teams compete to unlock new games and challenges in a quest to get their virtual robots to the finals!

Students (in teams of 6) compete within their class, grade, school, city and country in the last quarter of the year to complete missions, advance stages, and progress to the final world championship in every January. Apart from learning robotics, coding and STEM skills, students acquire an array of soft skills through the tournament:

Hundreds of thousands of students from 18 countries across the globe have already participated in CoderZ League, including Argentina, Australia, Canada, India, Israel, Russia, Singapore, the US, the UK etc. Let's get our Hong Kong students to the CoderZ League this year!

The CoderZ League includes 3 divisions: Novice, Junior and Pro. Throughout the league, gamified challenges progressively present students with more stimulating exercises to test and expand their programming and problem solving skills. Teachers and students are supported throughout the tournament with videos, webinars, and detailed user guides on how to build the team, motivate students, understand the CoderZ platform, as well as receiving weekly updates with information regarding the League and important tips and tools on navigating the challenges.

﻿Students become self-directed learners and teachers take on the role as facilitators. The platform is also data-driven which allows teachers to track the performance of each student identifying areas of strengths and weaknesses without the need for traditional formal assessments. 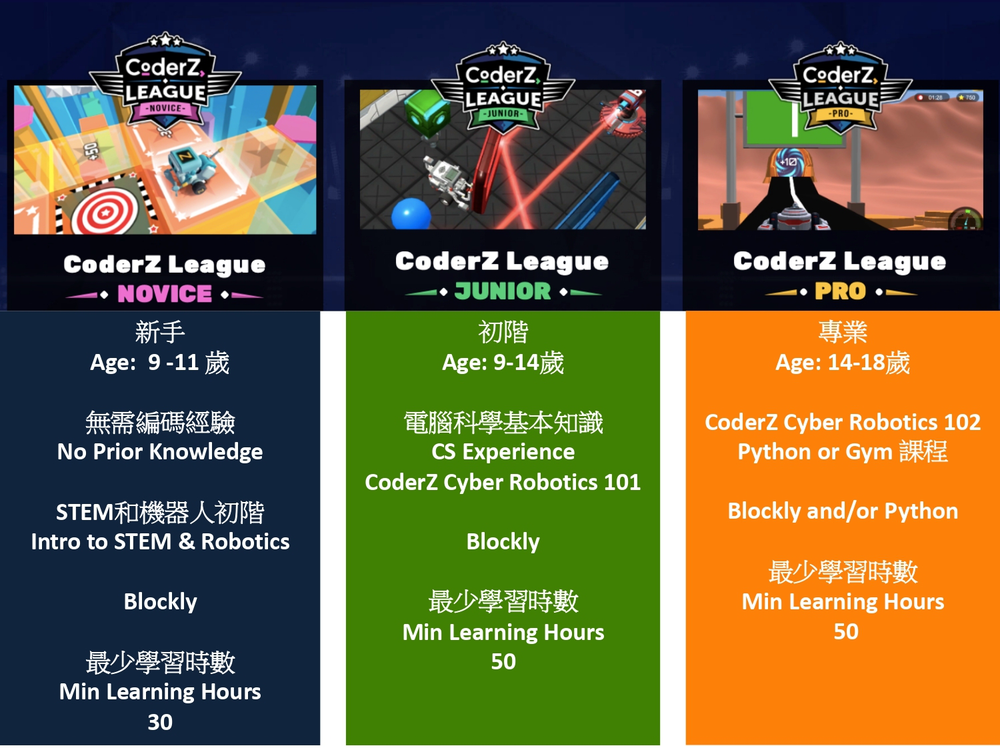 CoderZ League: How it Works?

The competition is made for teams. Every team has up to 6 students. The students will pick a name and a flag design that would represent their team in the competition. Teams will be divided into regions based on geographic location. All teams in a region will face off each other in different games through multiple stages.

School licence holders need to decide in September how many teams they will form under each division.

Training Camps open on 1 October. You can learn about the platform through a series of activities that will prepare you for the league. No points are awarded but the hours you log here will POWER UP your coding for the challenges you will face.

Teachers will join an online workshop to learn about how the CoderZ League operates.

The League comprises 4 rounds for the Junior and Pro Divisions. (See the special arrangement for the Novice Division below). Each division will have three games broken down into missions. The last mission of each game is the challenge, which will not be revealed until two weeks after the league begins. Junior and Pro divisions will have a chance to advance to the FINAL CHALLENGE at week four.

In the preliminaries, students (as many as 1,000 in the whole school) work together in teams to earn points and practice by completing missions and challenges. In every mission, each student can win up to 100 points.

After two weeks, the three Challenges are OPEN. The challenges will test all the concepts that the students have learned so far. The highest-scoring student will count toward victory for their team.

After 4 weeks, the fourth and final (harder!) challenge will be added. At the end of the preliminaries, bonus points are awarded to teams depending on their position on the previous challenge's leaderboard. These points will be added to the points they earned for missions, and all points together will be called the "overall score" for the preliminaries.

For Junior and Pro Divisions, the 64 teams with the highest overall score in every region in the preliminaries are qualified to the group stage whereby teams (split into 16 groups of 4 teams) from the participating schools play against the CoderZ AI: The Ultimate Robot, in an amped-up version of the final challenge. The top two teams of the two divisions will advance to the playoffs.

The top two teams in each group with the highest points (a total of 32 teams) will advance to the playoffs. The 32 teams then battle it out in a series of playoffs (elimination rounds) until a final team in each of the divisions is crowned the Hong Kong champion. The Hong Kong winning team of the Junior and Pro Divisions moves on to play in the WORLD FINALS vs. all other regional winners.

The two Hong Kong champions will enter into the final World Championship stage in Jan 2022, with live streaming of the battles on Twitch.tv/gocoderz​ (the world's leading live streaming platform for millions of gamers around the world).

For the Novice division, students will complete a series of missions and 3 challenges of the games during the Preliminaries from 27 Oct – 1 Dec. The team with the highest score will be declared the winner on 2 Dec. Towards the end of January 2022, the winning team of the HK Novice Division will compete with a team of 6 CEOs in Hong Kong.

For more details and FAQs, please go to the CoderZ League website​. Terms and conditions of the League may change, subject to the final decisions of the organiser. For the most updated information, please refer to the CoderZ League website​.

Public health conditions permit, the 3 winning Hong Kong teams will be invited to join the Big Idea International Tech Camp (worth HKD10,000 each together with return airfares) in the summer of 2022. Campers will get hands-on experience in different workshops to learn design, photography, gaming, music, wave surfing, robotics and many more cyber options. The workshops take place in small groups with experienced, professional and inspiring counselors. This is the chance for your students to learn with their peers from around the world and have the most memorable summer!

BIG IDEA international tech camps have been running since 2008. Every summer, kids and teens ages 7-18 from 30 countries, will meet in Israel and have a life-changing experience. Learn more about the camp here.​

Students of the winning teams will have job shadowing opportunities with tech companies in Hong Kong. 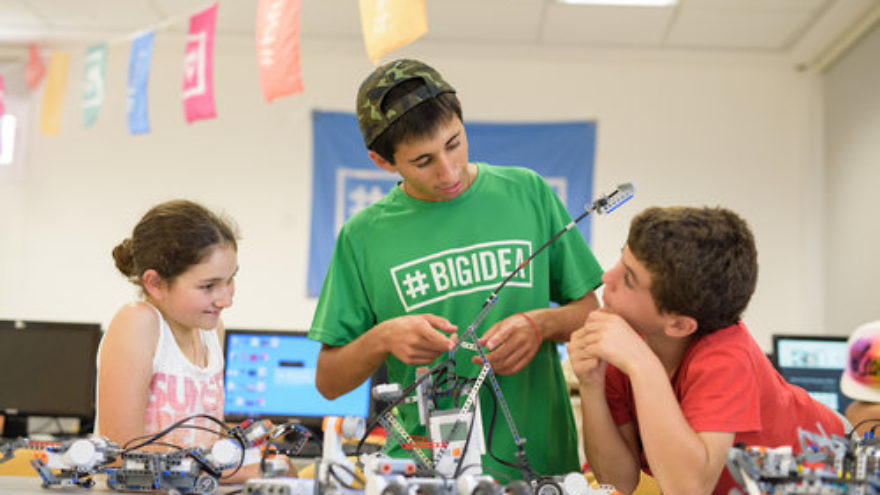 Get a CoderZ Licence Now!

CoderZ is making a special introductory offer to Hong Kong schools. School licence holders will enable up to 1000 students in your school learn all coding and robotics courses on the CoderZ platform and participate in any divisions of the 2021 CoderZ League from now till Jan 2022. This is only a few thousand dollars per month to learn coding for 7 months in a fun, engaging and empowering way with minimal supervision from teachers. School licence is available at $40,500.

Team licences are also available at HKD4,200 for 6 students in each team to access one CoderZ course and participate in one of the CoderZ League division until January 31st, 2022. 50% discounts will be offered for enrolment of 5 teams or more.

For students with the relevant coding background, they can also get a League Licence to participate in the CoderZ League 2021 at HKD2,300 for 6 students. 50% discounts will also be offered for enrolment of 5 teams or more.

Eligible schools could use the Education Bureau's Life Wide Learning Grant. Schools can also apply for the OGCIO IT Innovation Lab Grant.

CoderZ provides a full stack of teaching resources for educators to enable students to learn in a self-directed way.

CoderZ starter courses are available at 2-10 hours, for a minimum of 6 students. The hourly rate is HKD150 per student. Interested parties can indicate your preference via the registration form . Esperanza will arrange a suitable coding school to offer the training support.

*Starter courses are particularly suitable for students who take part in the CoderZ League only. Through a 2-hour workshop, students can get to know the mechanism of CoderZ.

For schools planning their 2022 programmes, CoderZ courses can be renewed at the following special prices: 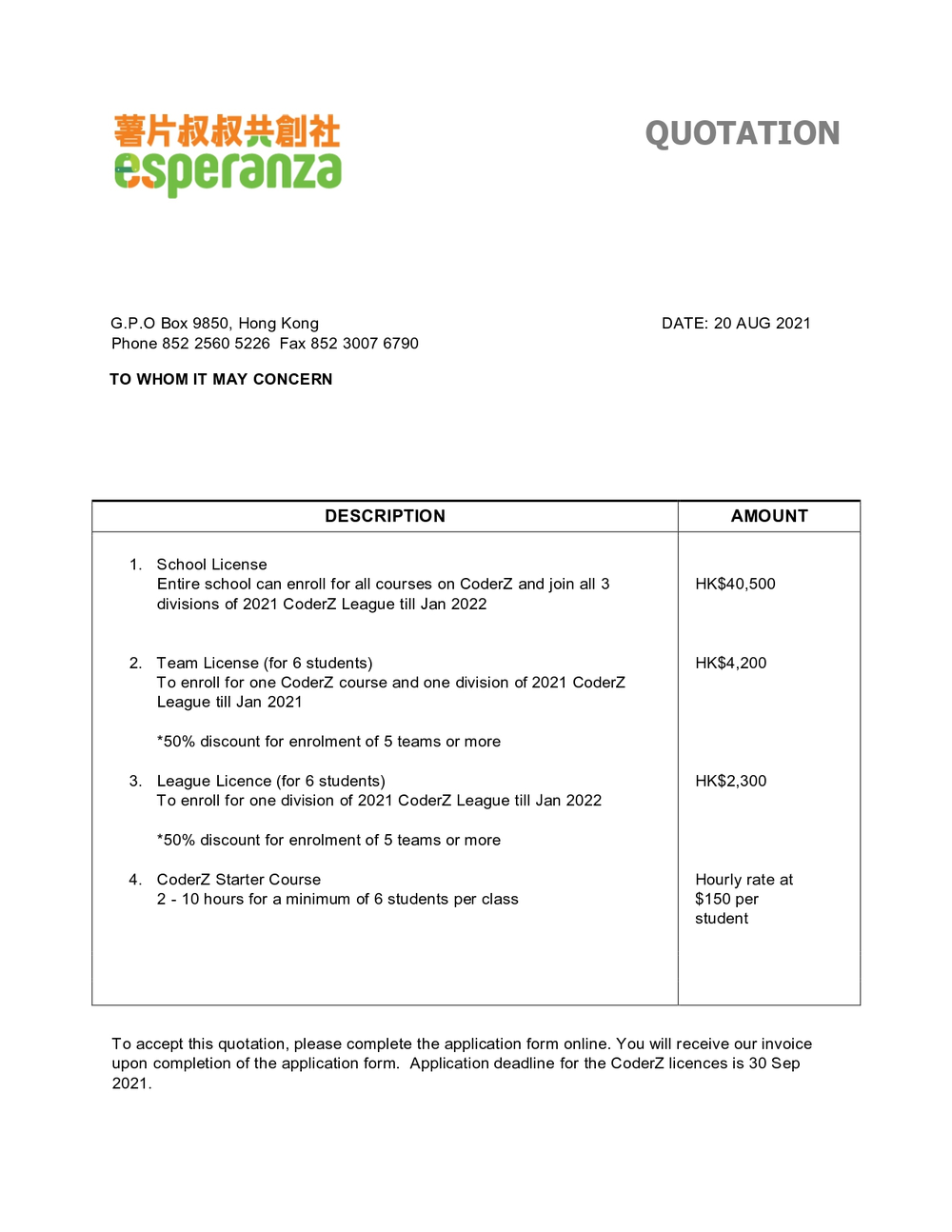 Get Your Free Trial

Undecided? ​Register for the trial licence and the CoderZ League Training Webinar on 5 Oct here​. The license is exclusive to Hong Kong educators. Each license can be used by a teacher and 3 students. Companies can now sponsor schools with less privileged background to join CoderZ League. At $40,500, you could:

Grab this opportunity to do good and do well, serving your talent development needs and equipping the future of our workforce with digital literacy!

CEOs of sponsoring companies can also join form a team of 6 to compete with the winning student teams this December! Contact us at cs.coderez@esperanza.life or WhatsApp at 5265 7975.