In 2020, 77.16% of Malaysia's total population lived in urban areas and cities. Cities have always been the centre of economic activities, technological innovation and human capital development but issues such as pollution, environmental degradation, congestion, and social inequality pose huge challenges to countries across the globe. The UN's Race to Zero campaign identifies cities as a major opportunity to accelerate broader decarbonisation efforts, and hundreds of city governments have already joined the campaign, including two in Malaysia. Developing smart cities through the application of technology, sharing of information and resources, and responsive governance will create new opportunities for sustainable development practices in these cities.

Join us for the panel discussion which covers the following: 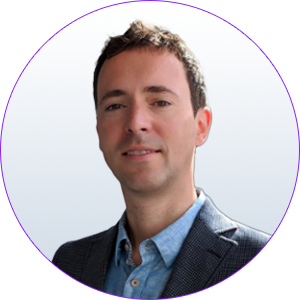 Sam joined the UK's Department for International Trade in April 2019, where he is responsible for the trade and investment relationship between Southeast Asia and the UK. He is based in Singapore and leads a team of 90 staff across ASEAN working in British Embassies and High Commissions to support UK businesses.

Before joining DIT, Sam worked for the pharmaceutical company AstraZeneca, where he was head of UK Science Policy and Relations. Sam's Civil Service career began in 2001 as a graduate FastStreamer in the Department for Trade and Industry, where he ran a Minister's Private Office before becoming the Head of External Relations. He spent 6 years in Asia with the Foreign and Commonwealth Office, boosting science and technology partnerships with Southeast Asia and China. Sam's structural biology research at Mount Sinai, New York, was published in the journal Science and he has a Masters in Biochemistry from the University of Bath. 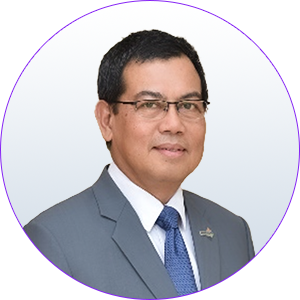 Datuk Ismail Ibrahim, a charted town planner, was appointed as Chief Executive of Iskandar Regional Development Authority in 2010. He has more than 30 years of professional experience working in the public and private sectors mainly in the field of urban and regional planning, development, and governance.

Amongst his many achievements in Iskandar Malaysia include securing a total recorded investment worth RM341.4 billion since 2006 to date and the successful execution of public infrastructure projects worth RM5 billion for the region. He is responsible for coordinating and facilitating public and private cooperation in developing Iskandar Malaysia through various programmes covering key areas including human capital and entrepreneurship, safety and security, youth development, public transportation, the environment as well as Smart City agenda.

Datuk Ismail is the main driver in transforming Iskandar Malaysia into a Low Carbon region. He established 'Low Carbon Blueprint for Iskandar Malaysia' which was launched in 2012, which aims to reduce the regional development's carbon emission intensity by 58pc by 2025 for a green and more sustainable yet economically dynamic environment. 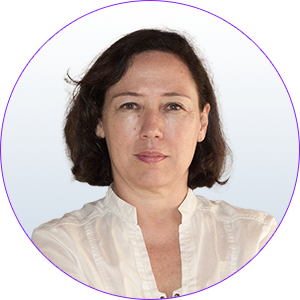 This generation architect, Serina Hijjas is one of the creative directors at HIJJAS architects & planners and is known for changing the building landscape of architecture through buildings that are responsive, energy conscious + bold. Her formative years exposed her to energy efficiency and sustainable design and have culminated in projects like the Heriot Watt University 'green campus', Celcom Tower 'interconnective offices' and EPIC waste training centre. Through a series of energy award buildings, the approach to design is holistic, responsive of placemaking + context with a view in generating new environmental sustainable specific strategies in every project.

The Malaysia Pavilion at Dubai EXPO designed by HIJJAS architects & planners will be the first Net Zero Carbon Pavilion at EXPO envisioned as a Pavilion in synergy with Nature inspired by the Rainforest and Malaysian traditional architecture of building on stilts. In the Canopy of trees and touching the ground lightly, the Malaysia Pavilion hopes to inspire its nation on the importance of sustainable growth.

Serina Hijjas is the Chairman of Green Building Index Accreditation Panel and Vice President of Malaysia Green Building Council in hopes to bring awareness to flatten the current carbon trajectory. 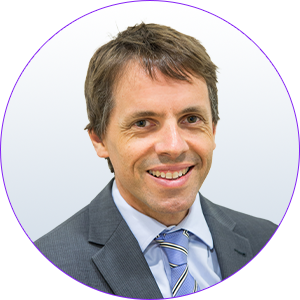 Dr Ross Grainger is a project director, business stream leader and the commercial manager of Mott MacDonald's energy team in South-East Asia. He is chartered professional engineer with 30 years of professional experience across the energy value chain in the Asia-Pacific Region.

Ross is a Fellow of Engineers Australia and an APEC International Professional Engineer. He has a PhD in electrical engineering from the University of Newcastle, Australia, and a Master of Business Administration (Executive) from the Australian Graduate School of Management. Ross has been working and living in KL since 2013 and resides with his wife and three young adult children in a sustainable eco-community on the northern outskirts of KL.

Mott MacDonald is a global, employee-owned management, engineering, and development consultancy. We are at the forefront of smart cities thinking, planning and development. Our smart city approach begins with outcomes for citizens, and is founded in the principle that better decisions, based on making better sense of better data, leads to better outcomes.

Mott MacDonald has proudly supported Malaysia's journey towards smarter cities since the turn of the 20th century. Our predecessors studied the electrification of street lighting and tramways in Penang. We designed Kuala Lumpur's SMART tunnel​. Nowadays we are renowned as a leading technical advisor for renewable energy and urban transport. We are currently helping the UK government's BEIS to launch a 2050 Carbon Calculator​for Malaysia and we are UK Prosperity Fund's delivery partner for the Global Future Cities Programme SEA including Iskandar and Melaka. 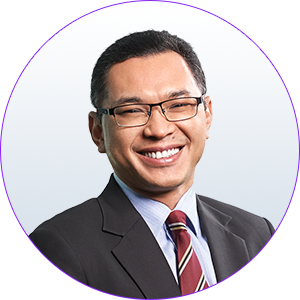 He co-founded Futurise – a wholly-owned subsidiary of Cyberview under the Ministry of Finance and HeiTech Global Services – which was later sold to Silverlake, and helped operationalize LAKSANA, the National Economic Implementation and Strategic Agency under Ministry of Finance where he and his teams tackled issues including organizational culture, stakeholder management and transformation / change management.

On the global stage, Mahadhir has represented Malaysia and his organizations as a speaker at the Krasnoyarsk Economic Forum (2015 - a World Economic Forum branch of Russian Federation), Smart City Expo World Congress (2016-2018) in Barcelona – where Mahadhir has been acknowledged as one of the global thought leaders in smart city initiatives, Global Transformation Forum (2017) and United Nations World Urban Forum (2018) which has led to him being invited to be a panel member of the United Nations Technology Innovation Labs. He has also shared his points of view on numerous topics including consultancy, advisory, technology and innovation through conventional media platforms (interviews on BFM, Bernama and Astro Awani), social media (Digital News Asia, VulcanPost, Startup Berlin, blogs) and a host of events around the globe.

As co-founder, Mahadhir has been managing Futurise Sdn Bhd as the Chief Executive Officer since its establishment in 2017. He currently chairs a number of strategic committees focusing on the development of Malaysia's future and regulations including the National Regulatory Sandbox (NRS) Advisory Panel and Cyberjaya City Innovation Council. He is also a member of various committees such as the United Nations Technology Innovation Labs Advisory Panel and the Malaysian Industry4WRD Regulatory Panel at MITI. He was also instrumental in the development of the Cyberjaya Global Technology Hub Blueprint and its implementation while he was the General Manager at Cyberview.

Mahadhir currently is attached to the Office of Minister of Finance, Malaysia as a Project Manager, having assisted the Head of Laksana throughout the establishment of the unit and agency since its inception in March 2020.

Mahadhir is also passionate about developing communities and society in general. He has contributed to pro-bono work for the Project Management Institute (PMI) where he was the Content Reviewer and Contributor for the Project Management Body of Knowledge (PMBOK) which is the guide used for all PMI-certified project managers (Project Management Professional – PMP) globally. He is an active participant in Malaysian education system at both the university and secondary school programs ranging from volunteer work to arts and STEM. 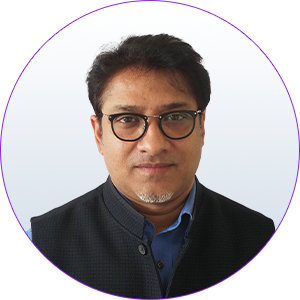 Niloy is a development economist with specialisation on effective institutions and capacity development. He previously led the UN System Affairs Group in UNDP, based in New York. In this position he led UNDP's interface with UN agencies, funds, and programmes, and with Member States in the arena of intergovernmental affairs. He has also led UNDP's engagement in the round of UN reforms.

In previous assignments, he has been the Director of Knowledge, Innovation, and Capacity Development Group; and Team Leader and Policy Advisor of Asia-Pacific – all for Bureau for Development Policy advisor who supported countries in Asia-Pacific and set up of the Singapore Policy Center for UNDP.

Niloy was appointed as the Resident Representative for Malaysia, Singapore, and Brunei Darussalam on March 7, 2019.

Niloy has a Masters in Economics from New Delhi's Jawaharlal Nehru University and is a Fellow of the City University of New York. 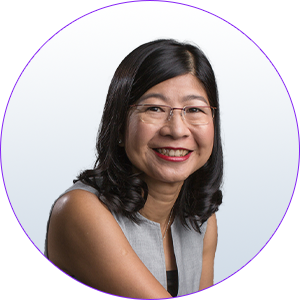 Pauline Ho is an Assurance Partner in PwC Malaysia and has over 25 years of experience handling audit and audit related assignments in Malaysia and United Kingdom. She joined PwC Malaysia in 1993 and after a two-year secondment with the London office of PwC UK, returned to the Malaysian firm in 2000.

Her portfolio of clients includes a wide range of Malaysian and multinational companies in various industries including entertainment & media and oil & gas. Besides her audit portfolio, she has managed projects involving corporate exercises such as public floatation, equity issues, cross border offerings, due diligence reviews for proposed acquisitions, operational reviews of business processes and Integrated Reporting implementation and benchmarking advisory.

Pauline is also the Chief Strategic Operations Officer for PwC Malaysia-Vietnam region and is part of the firm's Executive Board, Human Capital Leader in PwC Asia Pacific, a regional collaboration of PwC firms in the Asia Pacific region, and PwC Malaysia's Net Zero Leader and Diversity and Inclusion Leader. She was previously the People Partner and Assurance Leader for PwC Malaysia.

Pauline is currently a steering committee member of the 30% Club, Malaysia leading the board mentoring programme in the country. She is also a member of the Practice Review Committee and Integrated Reporting Steering Committee of the Malaysian Institute of Accountants (MIA).